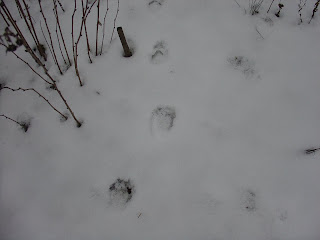 Well, all this snow revealed that we have yet another visitor to happy house, a nocturnal one this time, investigations (we googled it) lead us to believe that it is a badger....what do you think? 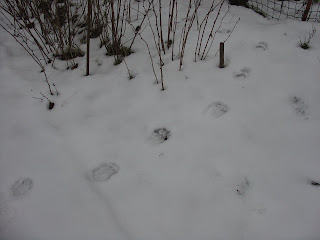 I'm so fed up with it now, the weather that is, now we're having flooding!...Not right where I am fortunately, we have been forced to abandon walking to school for the time being as our council don't see fit to make the footpaths safe for pedestrians & parts of them are like mini ice rinks!

That's enough moaning for the day, I'm going to have to have a lie down in a minute a I have got the most awful headache, I've had it all night, but didn't have an 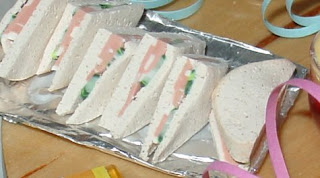 y painkillers in :(, thought I'd just quickly post to show you that I haven't been slacking in the miniature making, I have been creating a childrens birthday party table & a 21st party table!, here's a sneaky prev


While I have a lay down, I'm going to think of an idea for a giveaway....pancakes I think!
Todays happy thought-Will think of one later-head hurts too much!
Posted by Sam at 9:51 AM

Oh I just love reading your blog and looking at all your little mini items! Your tables are fantastic!

They look deliciously nice.....can you share your recipe? I would appreciate it.