I haven't had much time for my blog over the last week, & I have still to announce the winner of the giveaway....will do that tomorrow, I have to tell you about the new family members!

On Friday morning, at the busiest time of our day, my daughter noticed some fish babies hiding in the tank, sadly one was eaten up my the mother (who, ravenous after giving birth, forgets that she has had babies, then sees little fish swimming around & thinks...."ooooh little fish, I'm starving yum!") the other one just died I think, or was attacked...however, we could see that there was more babies to come, so I dropped children off at school & went straight to buy a nursery net. 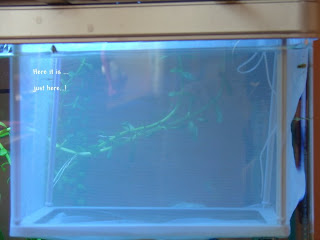 That night, she could see two more swimming around the bottom of the tank, so we sprung into action, it was a family effort catching these practically invisible fish & putting them in the safety of the nursery...we then had a bit of a disaster as the baby food that you are supposed to put a drop of in, burst & emptied half the bottle into the tank......aaaaaaaaagh, so we did an emergency water change & everthing is once again harmonious in the land of fish!
Posted by Sam at 6:17 PM

I used to have an aquarium and miss it but when the PH got imbalanced and things started to die, we shut her down! Glad you could save the little fish! They are so interesting to watch and sometimes I think . . . but with three children, two indoor dogs and one semi-indoor cat, me thinks not!