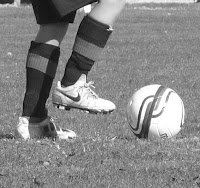 Well , nearly six weeks in and I'm surviving! I am just coming to the end of my first project which was on the subject of identity.
I decided my project would be Me v football because all my life I have had football inflicted on me even though I'm not interested in it at all.
I set out to football training and matches every weekend, camera in hand to study various aspects of the game, I needed to represent how football has inflicted itself on me during my life, Liverpool as a child and still now, Manchester united through my marriage and Rayne youth in motherhood. 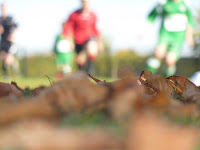 I also had to present my work, which I hate, there seems to be a lot of presenting during this course, and writing, (which basically just isn't art , so not popular!!) n 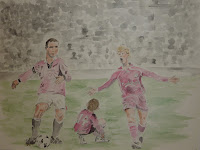 o one told us that.
still I'm really enjoying it and have made so many new friends:)

all of my photography project work can be found at Me v football and football set.
Sams Flickr photostream

Todays happy thought: "some people think that football is a matter of life or death, it's much more serious than that" -Bill Shankley
Posted by Sam at 10:09 PM